If you have been following this blog regularly, you will recall the Project Manager had a very bad day at the office.

He achieved all his Key Performance Indicators. He got a healthy raise. Team morale is excellent, and his newest team members are especially enthusiastic about the next project. All the company’s clients are satisfied, and the CEO was in an especially good mood. But when he tried to apply his project management skills to the game of Spider Solitaire everything unexpectedly turned to 83,72,73,84. Where did he go wrong?

The attentive reader may have picked up the first move was a colossal blunder. The only suited move was the Ace of hearts onto the Two of hearts. But because those cards were in different halves of the tableau, neither Team Player 1 or Team Player 2 spotted it. I don’t know about you, but when a team of three people 70,85,67,75 up the very first move of the game it’s a pretty bad sign. Dividing a complex task into sub-problems is not trivial, and of course there are the overheads associated with communicating outputs between team members (as any project manager will know!).

Another (albeit less obvious) problem was that the number of face-down cards remaining is not a very reliable indicator of how well the game is going. Recall that the Project Manager realised the game was going badly when there were 20 cards left in the stock and he was nowhere near 18 face-down cards.

Although I didn’t explicitly mention this in the story, the Project Manager was implicitly assuming that progress should be about linear. Thus every time we deal another 10 cards from the stock we should expose at least C face-down cards, and C can be calculated using simple math (18 is not exact but it’s sufficiently close for purposes of the story). Linear approximation is unreliable, since one could very well have a game where things start badly, but once a critical suit is removed, everything opens up and a large number of face-down cards get exposed without the player even trying (because the game “plays itself” for lack of better expression).

A more serious problem is that the Project Manager assumed that the number of face-down cards alone was enough to estimate how well a game is going. This assumption is clearly wrong, and a good player should be considering a number of factors, such as how “clean” various columns are or how close we are to getting an empty column or a complete suit etc. Obviously this is far from trivial, but I recommend that a beginner should be thinking about a game plan like the following:

The items at the left indicate milestones. Thus, our first objective is to get an empty column. The next item of business is getting a number of suited builds (e.g. 6 of Hearts onto the 7 of Hearts etc). Next, we then remove a complete suit to the foundations. The good news is that once the first suit is complete, winning the game often becomes a formality. The labels R0 through R5 indicate rounds of cards dealt from the stock. The game starts at R0 and every time 10 extra cards are dealt we move to the next round. Once R5 is complete, the game is by definition either won or lost. The green bar at the top says that if we can obtain at least 1 empty column by Round 2 (or earlier) then we are “on schedule” to remove all suits before the stock runs out. If we can’t obtain an empty column by Round 2 then we have cause for concern.

The second green bar says we need at least 25 suited builds by Round 3, but also we cannot hope to achieve this until we achieve our first goal of 1 empty column, as represented by the tiny blue arrow. Obviously this is a simplifying assumption: one may get lucky with suited builds before an empty column is exposed, but this tends to be an exception. Once you get an empty column or two it is much easier to tidy up your columns and arrange cards in-suit with the usual “Tower-of-Hanoi” manoeuvres. Experienced players can experiment with more complex game plans, but if you’re a beginner it’s safe to assume that 25 suited builds ain’t happening until you get that empty column. Once you have enough suited builds, now is the time to start thinking about completing a full suit. The third and fourth green bars are interpreted in a similar manner.

No doubt those of you who are reading this at the office and snickering while the boss ain’t looking may have recognised the diagram as a Gantt Chart, named after Henry Grant (1861-1919), an American mechanical engineer and management consultant.

Multiple paths to every milestone

Recall the first milestone was getting an empty column. Note that I didn’t say we should focus on the column with fewest face-down cards. That would be putting all our eggs in one basket, if you excuse the terrible cliché. Often it is wise to keep an eye on several columns at once. We don’t need to have a plan for every letter of the alphabet, but it is much easier to clear a column if you have 2 or 3 potentially good columns (so a single 75,73,78,71 won’t 70,85,67,75 everything up). Similar comments apply to the other milestones.

In the previous story, Team Player 1 was pleased with the deal of R3 because he could get two in-suit builds without help from Team Player 2. This was fighting the wrong battle (although to be fair the damage was probably already done if you excuse the cliché). At this stage the team desperately needed empty columns and/or complete suits and they weren’t anywhere near achieving that.

As you gain more experience you may enhance the Gantt Chart. For instance, once you get an empty column, you may decide your next task should be a second empty column, 25 suited builds or work on both simultaneously. Similarly, you might decide that once you remove a full suit, you may add a task of finding a second suit. Or you might decide that 25 is not the correct number and replace it with something slightly higher or lower, and so on. An example game plan for an advanced player could be something like this: 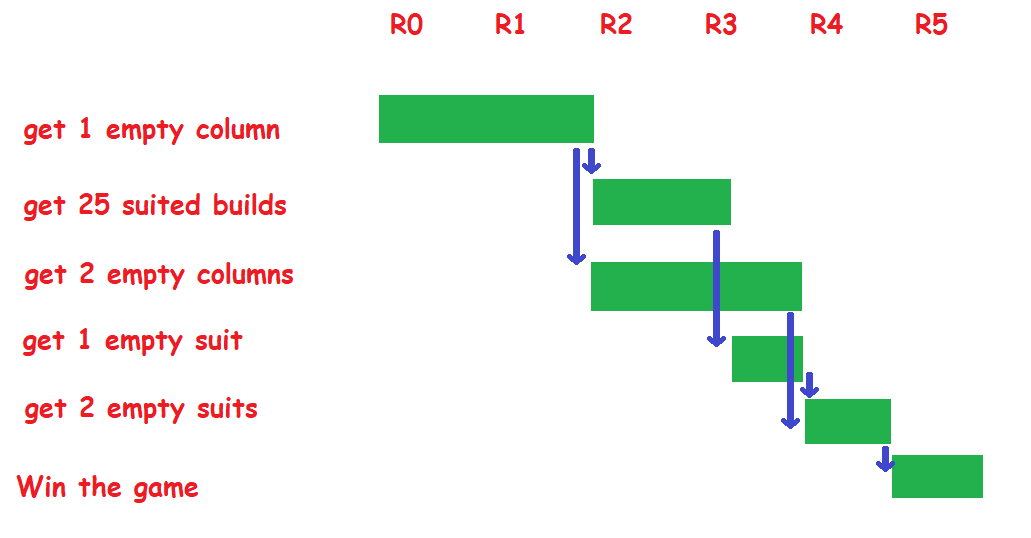 Finally, one should remember that a Gantt Chart is a living document, written in English not Latin. If a game is progressing badly (or conversely if an unexpected opportunity presents itself), it may be wise to adjust it accordingly.

The main advantage of having a Gantt Chart is it gives the player (or team of players!) a rough idea of where they stand (in terms of winning chances), hence they know when a change of strategy is required. So the fact that our Project Manager had a Gantt Chart at all indicates he is doing something right! Without a Gantt Chart, it is too easy for a player to drift into a lost position without understanding where he went wrong. This leads to the worst of both worlds when a player loses a game and also fails to learn anything from his defeat.