“It’s been an excellent year,” said the Chief Executive Officer. All the staff members are beaming with pride.

“Another month ends. All targets met. All customers satisfied. Our new team members are especially eager and enthusiastic.”

Everyone laughs as the CEO reaches the final slide of his Powerpoint Presentation: a picture of Santa Claus riding into the subset, but with the usual reindeer replaced with flying pigs.

“I would like to thank y’all for the hard work you have put in,” continues the CEO. “Today will be a very special day. Every staff member will be allowed to goof off the rest of today and play as much Spider Solitaire as they want.”

The Project Manager groaned inwardly. As if he needed to be reminded of his failure at that blasted game, especially at the 4-suit level. His significant other could boast a win rate of 20%. He was lucky to obtain half that rate, even with the help of 85,78,68,79.

Despite the many years of tutelage from his wife, the Project Manager was unable to see the board as a whole, especially with two decks of cards. The game was way too complex, especially considering that exposed cards were not necessarily always in descending sequence and half the cards were face-down.

Hang on he thought to himself. Maybe if he organised a team of players instead of a single person then the chances of victory would increase. Divide and Conquer, if you excuse the cliché. At least that would give him an advantage over his significant other. She always played solo.

Team Player 2 can only nod in agreement. He only learnt how to play the game a week ago.

“We need to approach the game systematically,” said the Project Manager. “It’s tempting to rush in and play the first move that springs to mind but I think if we can work as a team it will be better in the long run.”

Team Players 1 and 2 nod in agreement

“So here’s the plan,” says the Project Manager. “Team Player 1 will focus only on columns 1-5 and expose as many cards as he can. Team Player 2 will handle columns 6-10. When both of you are stuck I want you to report your progress, and I will take things from there.”

“I only turned over one card,” says Team Player 1. “I need a Five, Eight or Queen from Team Player 2 … or an unlikely Deuce-Three combination”.

“Excellent,” says the Project Manager. “Jack of Clubs onto the Queen of Hearts.”

They expose a Deuce of Clubs.

Team Player 1 is more than happy to shift the Ace of Clubs in-suit onto the Deuce in column 5. Unfortunately Team Player 2 has nothing else to report.

“This is going well,” says the Project Manager. “Ace of Hearts onto the Deuce, in suit!”

“I think we’re in trouble,” says the Project Manager.

“There are only two rounds left in the stock,” replies the Project Manager. “According to my Gantt Chart, we should have only 18 face-down cards remaining. But we’re not even close.” 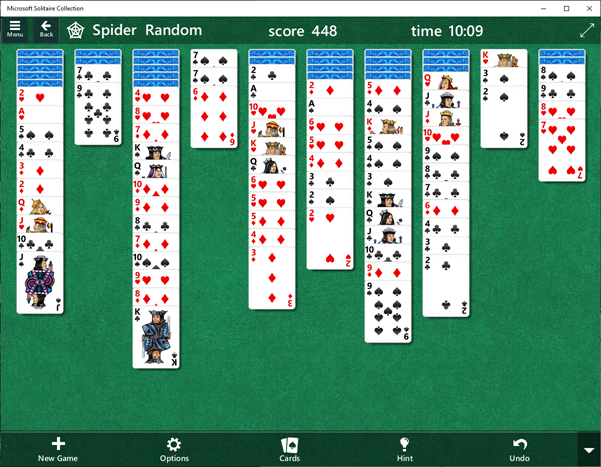 It’s all over but the groaning. The Project Manager catches the next bus home and reflects on his crushing defeat. He can’t remember having a less productive day at the office.

“Hi Hun, I heard the good news from your work colleagues …”